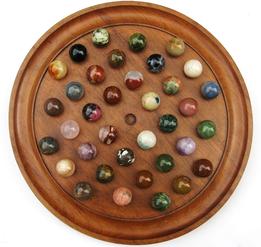 The European version of the popular game "Brainvita" (or "Peg Solitaire") looks as follows:

Prove that the initial configuration as shown in the representation is not solvable.

Background:
The game fills the entire board with pegs except for the central hole. The objective is, making valid moves, to empty the entire board except for a solitary peg. A valid move is to jump a peg orthogonally over an adjacent peg into a hole two positions away and then to remove the jumped peg.